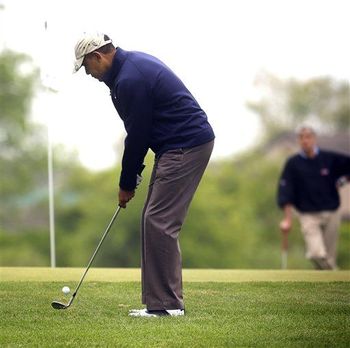 (NEWSER) – Obama continued his campaign to woo Congresspeople to his second-term agenda today, inviting Republican Senators Saxby Chambliss and Bob Corker, and Democrat Senator Mark Udall, out for a round of golf at St Andrews Air Force Base, the New York Timesreports. The White House acknowledged Obama's dates weren't just chosen for their killer chip shots (though they are some of Washington's best golfers, notes the Christian Science Monitor), Politico reports. "He’s willing to try anything," said the White House press secretary. "And whether it’s a conversation on the phone or a meeting in the Oval Office or dinner in a restaurant or dinner in the residence, he's going to have the same kinds of conversations."

FDA OKs Morning-After Pill for Ages 15 and Up 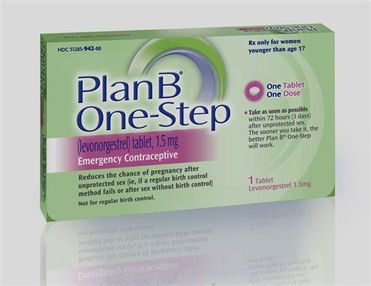 (AP) – The Plan B morning-after pill is moving over the counter. The FDA announced today that the emergency contraceptive will be available without a prescription to those ages 15 and older. The pill also no longer needs to be behind pharmacy counters. Instead, it can sit on drugstore shelves just like condoms, but buyers will have to prove their age at the cash register. Earlier this month, a federal judge ruled there should be no age restrictions and gave the FDA 30 days to act. The FDA said that its latest decision was independent of the court case, and that Justice Department lawyers were still considering their response to the ruling.

"Research has shown that access to emergency contraceptive products has the potential to further decrease the rate of unintended pregnancies in the United States," says FDA chief Margaret Hamburg. "The data reviewed by the agency demonstrated that women 15 years of age and older were able to understand how Plan B One-Step works, how to use it properly, and that it does not prevent the transmission of a sexually transmitted disease."

Obama: We Don't Have All Facts in Syria 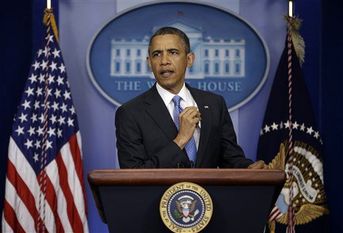 (NEWSER) – The US is pretty sure someone has used chemical weapons in Syria—but it's not sure who, President Obama revealed at a White House press conference today, at which he invited reporters to ask him questions on whatever they pleased. "What we now have is evidence that chemical weapons have been used in Syria," Obama said, according to the Guardian's liveblog. "We don't know how they were used, when they were used, who used them." He said he wanted to avoid "rushing to judgment without hard effective evidence."

Obama also said that, while chemical weapon use is indeed a "game-changer," that didn't necessarily mean war. "By game-changer I mean we would have to rethink the range of options that are available to us." Other tidbits from the press conference:

Boston Bomb Had Female DNA on It: Authorities Say
BUT THAT DOESN'T NECESSARILY MEAN A WOMAN HELPED THE TSARNAEV BROTHERS... 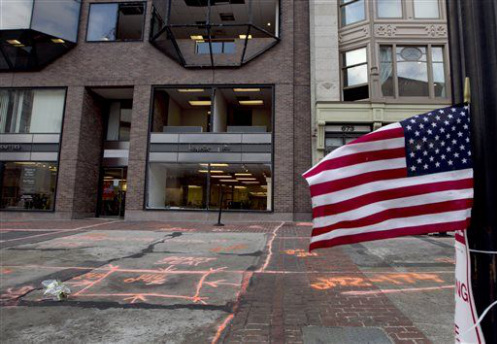 A flag flies at the blast site on Boylston Street between Dartmouth and Exeter Streets near the Boston Marathon finish line Monday, April 22, 2013 in Boston. (AP Photo/Robert F. Bukaty)
(NEWSER) – At least one of the bombs used in the Boston Marathon attacks had female DNA on it, investigators say, but that doesn't necessarily mean the bombers had a female accomplice. Officials gave a handful of alternate scenarios to the Wall Street Journal: A store clerk could have handled materials later used in the bomb, or a female hair could have innocently ended up on it. The Journal notes that FBI agents were seen leaving the home of Tamerlan Tsarnaev's in-laws today. Tsarnaev's widow, Katherine Russell, has been staying there since the bombings, and one official says the agents were there to get a DNA sample from her to see if it matches the one found on the bomb.

Meanwhile, Dzhokhar Tsarnaev has another lawyer. Judy Clarke, who was also on the defense team for Jared Loughner, has been appointed to join the three federal public defenders already assigned to Tsarnaev, Politicoreports. That's because she has a lot of experience with death penalty cases; her appointment will probably lead some to speculate that she'll be able to negotiate a plea bargain with a life sentence rather than death, as she did for Loughner. The Atlantic Wire notes that Tsarnaev's attorneys have represented quite a few bombers, terrorists, and other well-known criminals, including Zacarias Moussaoui and the Unabomber.